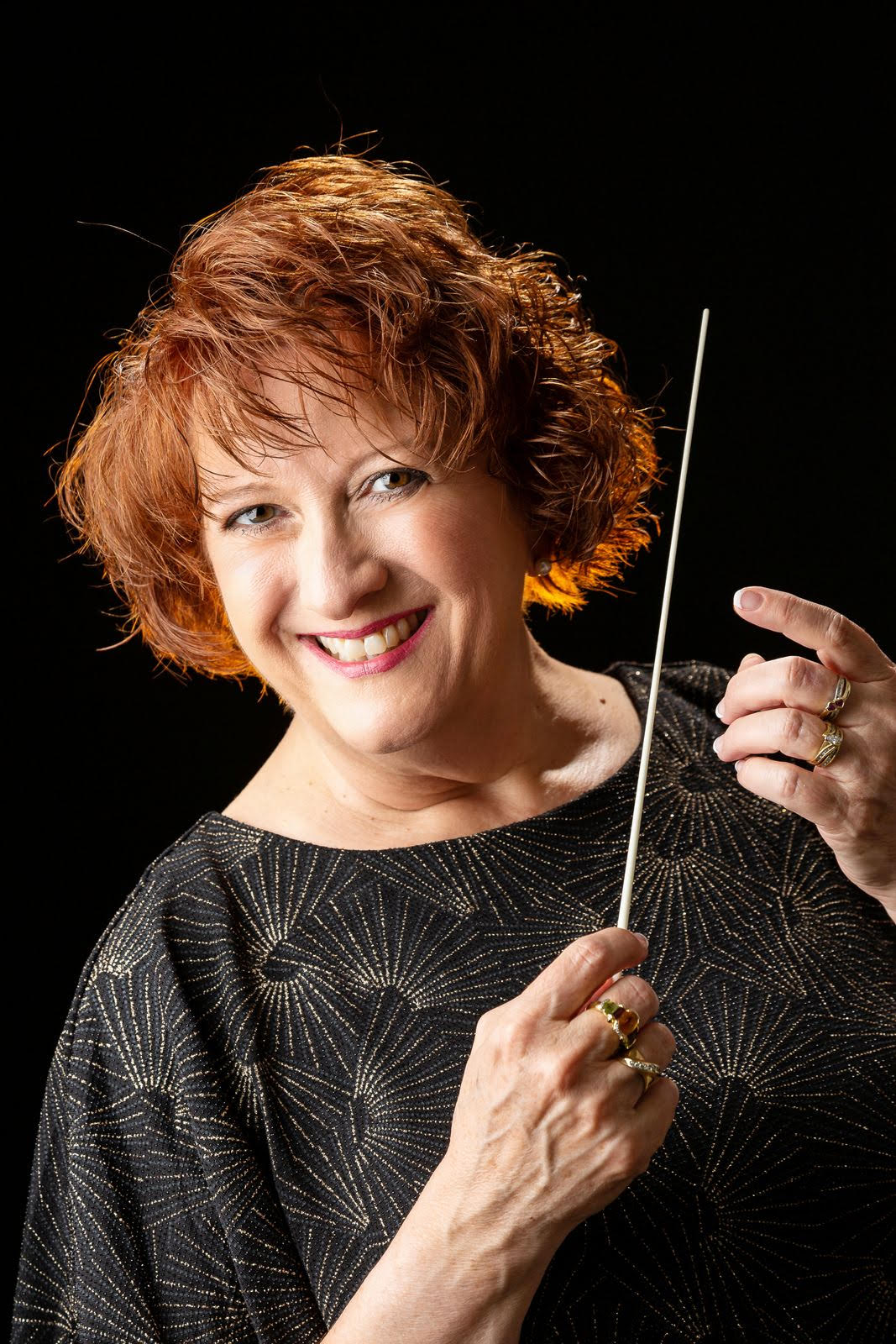 With a music career spanning more than 30 years, Patti Graetz, has been with ProMusica Arizona since 2015, first as Assistant Conductor and Conductor of the Women in Song vocal ensemble, and now as the newly-appointed Artistic Director and Principal Conductor.  Not only is she a skilled conductor, but she is an award-winning soprano having sung leading roles with major opera companies including Houston Grand Opera and Arizona Opera.

A Valley resident since 1989, she was head of vocal departments at the Arizona Conservatory for Arts and Academics in 2003 and at the Arizona School for the Arts from 1998-2002. She was Director of Music at Shepherd of the Valley Lutheran Church in Phoenix from 1995-2004. Before that, she was Director of Music at Scottsdale Presbyterian Church. Patti attended Concordia College in Moorhead, Minnesota where she was a soloist in the world-renowned Concordia Choir under the direction of Paul J. Christiansen.

She is married to Australian husband, Trevor, and has three children and three grandchildren. She teaches private voice and piano at home and recently sold her successful mobile teaching studio, The Music Bus.

You might spot Patti getting some “wind-therapy” on her Can-Am Spyder three-wheeled motorcycle, riding to rehearsals and even cross-country. In the summer of 2018, she and her husband rode – on separate bikes – almost 5,000 miles to Colorado, the Black Hills, Yellowstone and the Grand Tetons before returning home. 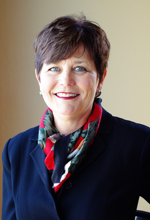 Yvonne Dolby is the Executive Director for ProMusica Arizona and oversees the business, marketing and development operations. Prior to joining ProMusica Arizona in 2011, she served on the Anthem Country Club Communication Committee and the Anthem Veterans Memorial Planning Committee. She also worked with a team of communication professionals to create the North Valley Posse communication plan, website and brochure, and she served as website administrator for the Anthem Community Council. Yvonne has numerous articles on a variety of topics published in magazines, newspapers and online, and she has received both a Service Award and Citizen Award from the community for her contributions.

Prior to moving to Arizona in 2004, Yvonne worked for 12 years as General Manager of a privately-held business that sold shipping containers to industrial clients. She holds a BA in Communications from California State University, Fullerton where she graduated with honors. 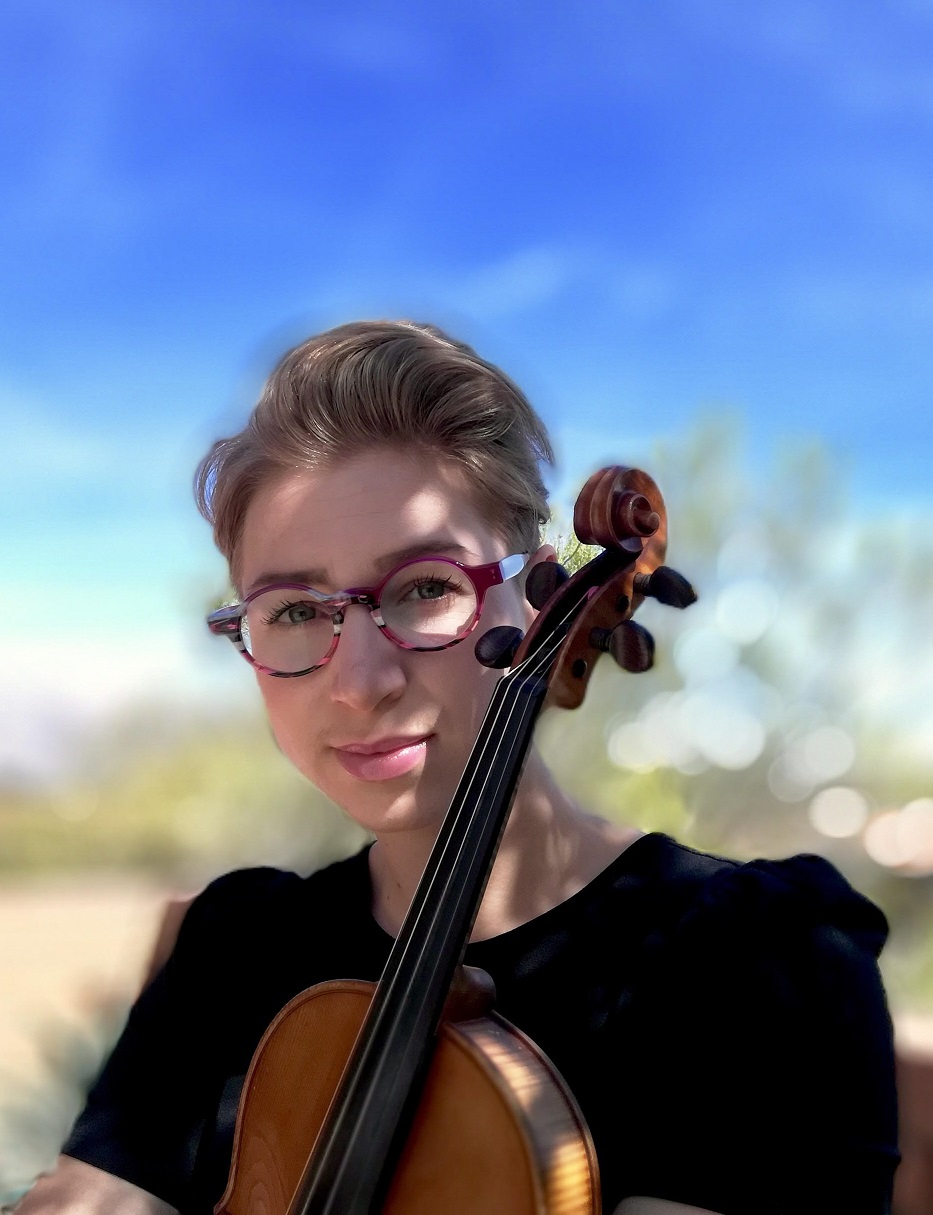 Meghan Ruel is a vibrant performer and dedicated educator. She is committed to connecting communities and youth through art and energizing audiences of all ages across the country. Meghan has collaborated in chamber music and orchestral settings in Canada and the United States, including Luminato International Music Festival, Austin Baroque Orchestra, True Concord Voices and Orchestra, and is currently concertmaster with ProMusica Arizona for the third season. She is a teaching artist and leads creative youth development programs including Harmony Project Phoenix, Phoenix Conservatory of Music, Arts at Nativity, Arizona String Teachers Association, and at schools including Pan American Charter School, Arizona School for the Arts, and Desert Marigold Waldorf School where she was the Instrumental Strings Teacher from 2016-2019. She established, with the help of Executive Director Regina Nixon, a mixed-ability string ensemble at the Phoenix Conservatory of Music and also leads the Orquesta Infantil at Harmony Project Phoenix where she teaches in their after-school programs with her husband and guitarist, Diego Miranda.

Meghan recently accepted a faculty position at Arizona Christian University as String Department Director and Professor of Violin where she is developing a new home of teaching and performance exploration for string students. Meghan and Diego spend their summers designing outreach programs at Madeline Island Chamber Music (WI) where Meghan has been Community Engagement Manager since 2016. She teaches injury prevention masterclasses for communities and conferences including the Arizona String Teachers Association, and she founded her accessible online program, FitForte, after receiving her certification from the American College of Sports Medicine.

Meghan finds the most joy for musical collaboration when writing and recording with her husband. They perform regularly in Phoenix as a classical/electronic duo and are planning a 2020 tour. Meghan earned her Bachelor of Music in Violin Performance from the University of Toronto and her Master of Music in Violin Performance from Arizona State University. Her teachers have included Joan Milkson, Annalee Patipatanakoon, Timothy Ying, and Jonathan Swartz. 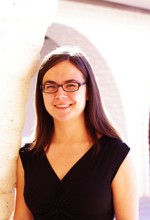 Helen was born and raised in the Netherlands. In 2000, her family moved to a small town in Iowa. In 7th grade, she started to accompany her grade school choir, which sparked her interest in accompanying. In high school, she became the accompanist for the Siouxland Boys Choir, toured with them and recorded 12 CDs. She also served as a local church organist. During high school and college, she was the rehearsal and performance pianist for many musical and opera productions such as Oklahoma!, The Sound of Music, Seven Brides for Seven Brothers and Mozart’s Die Zauberflöte.

Helen moved from Iowa to Arizona and graduated from Northern Arizona University with a Bachelor of Music in Piano Performance with an emphasis on accompanying. She went on to complete her Master of Music degree in Collaborative Piano from Arizona State University. During her years of study, she had the opportunity to participate in many masterclasses, including those led by Jeffrey Swan, Dmitry Rachmanov and Zuill Bailey. Helen has studied privately with Prof. Rita Borden, Dr. Walter Cosand and Prof. Russell Ryan. She is currently a music faculty adjunct at Grand Canyon University.